Original finish model horses are models that have not be altered in anyway. They are in the same state as they were in when they first left the factory. These are the models that most of us will own in some form or another at the beginning of our collection. Some people may collect entirely original finish models whilst others may not have a single one, but one thing is for sure at some point we all owned one!

Original finish is often abbreviated to OF by collectors. You may see this on a show schedule or in the description of a model.

As a broad sweeping term original finish includes all models that are factory produced and have not be altered in anyway. Everything from Northlights to Breyers to Schleich.

However, when looking at a show schedule it is worth making a note of the other sections and what is allowed in OF. Many shows will split out Commercial Resin and China into another section, or simply not allow them in OF and not have a section for them at all. If you live in the UK CTF models such as Schleich will also often have their own section. In fact at most live shows the OF section is only for Breyers, Peter Stones, Copperfox and Hartland models.

If a show schedule does not make it clear what is or isn't allowed in OF and there is no separate section for say Commercial Resin & China then always check with the show holder first. If you are running a show make sure you make it clear what you do and do not want to include in OF.

Because we have split out commercial resin/china and CTF on our website we are only going to talk about OF plastic on this page.

There are four main original finish plastic brands that you will encounter:

Occasionally you may see other brands but at most live shows these are going to be the brands you will find in an OF section. Breyer are by far the most common brand to see in OF sections but some classes such as British Native may be dominated by other brands such as Copperfox.

Within each brand there are a variety of different scales. Models may have also been produced in other finishes by these companies that would not go in OF plastic. An example would be a Copperfox resin that would be shown in Artist Resin (these are sold blank) or a Breyer Gallery Porcelain which would go in Commercial Resin/China (these are sold painted and mass produced).

Some shows will separate original finish sections. This could be done by scale (e.g. Traditional or Classic) or by rarity (e.g. Regular Run or Special Run) or by the model type (e.g. splitting out Factory Custom Peter Stones).

Even the same model can vary greatly even if it is mass produced. If you are at a show why not have a good look at the classes to see if you can spot variations between different models? 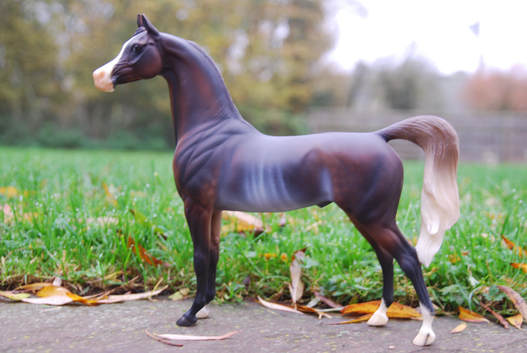 Original Finish models come in different body finishes that can lead to different effects. Some people prefer more realistic matte models whilst others might like the more dramatic effect of a glossy model. The finish of the model can really change how it appears, take a look at the same model in both a matte and a glossy finish and see how it effects the overall colour (a good example is Breyer GG Valentine and Heartbreaker).

Matte models have a dull finish that looks more realistic. These are the most common finish of models you will see.

Semi-gloss models have a slightly shiny finish, the majority of the Copperfox glossy models are semi-gloss.

Glossy models have a shiny finish that almost looks liquid. You may also see the term 'high gloss', as the name suggests this refers to models that are extremely glossy!

When is OF not OF?

There are many controversial areas of the model horse hobby and this is just one of them. Even by writing this heading I'm sure you have already formed an opinion about what I am going to write or what I 'should' be about to write.

Original finish models should be in the same condition as when they left the factory which begs the question, what happens about touch ups? What about restoration? Custom gloss?

As with most things it is really about scale, touching up an ear tip run with black pastel will by most not be regarded as customising but heavy restoration may be regarded as customisation. Some will argue that it depends on whether the model has changed from its original state (so for example spraying a matte model with a gloss sealer would be customising, but spraying it with a matte sealer maybe not). Others will argue that ANY alteration or repair is customisation.

Personally I think the altered from the original state definition is a good one. A matte model that has been sprayed glossy is definitely not original finish anymore, an ear tip rub is probably OK. It also depends on moderation and honesty. If you have touched up a model and you are selling about it, be honest about this. In terms of showing, if you are not sure then check with the show holder. If you are running a show have a clear idea in mind and let show entrants know.

It is also worth noting that 'buyer beware' should come into play here. Fake glossies do exist just as fake models exist. Check provenience and remember if something is too good to be true it probably is. 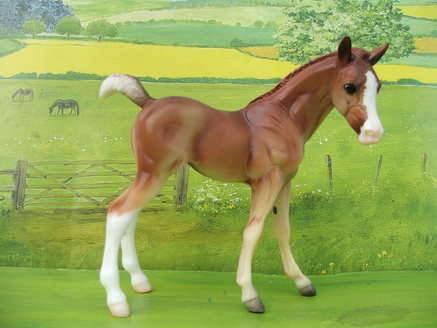