This size guide is here to give you a visual guide to the various different model horse sizes and scales.

Scales are presented as a ratio e.g. 1:9 scale. What this means is that the item is 9x smaller than the item in real life. So if a real horse was 153cm high, the model horse would be 17cm high.

The larger the second number, the smaller the item.

This photograph shows a horse in each of these scales all lined up together:

Model horses are to scale, which means that heavy horses are often larger and ponies much smaller. This picture shows a Heavy Horse, Light Horse and Pony: 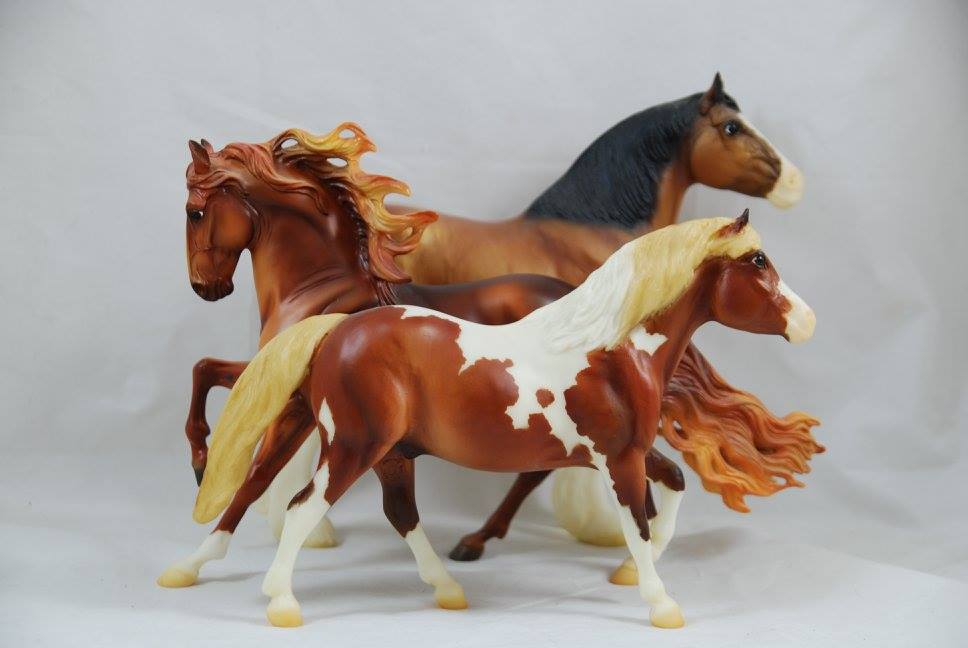 Classic scale horses are generally regarded as 1:12 scale, although within this scale there can be a bit of variation. Just as with all other scales the size of the model will vary depending on the breed type. Below is a comparison between a heavy horse, light horse and pony. 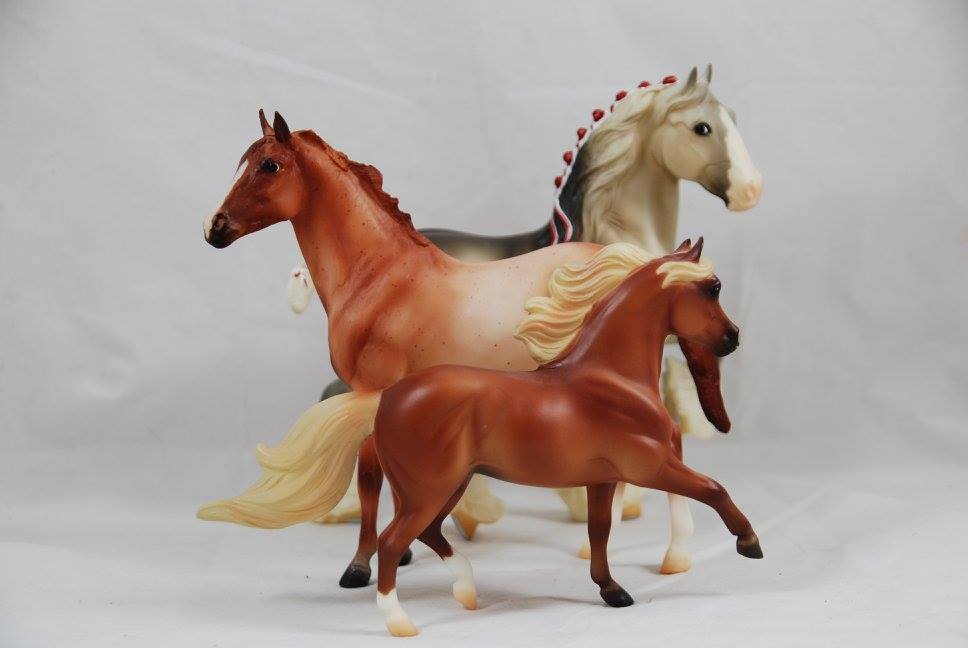 Heavy Horse (Shire A)
Light Horse (Duchess)
Pony (Midnight Tango*)
​
*Midnight Tango is often regarded as a 1:9 scale Miniature Horse as well as being in scale for a 1:12 scale pony.

Other 1:12 scale makes such as Julip horses and Equorums vary in their scale compared to Breyers. Both Julip and 1:12 scale Equorums are slightly smaller than their Breyer counterparts. Below is a comparison between a Breyer, Equorum and Julip: 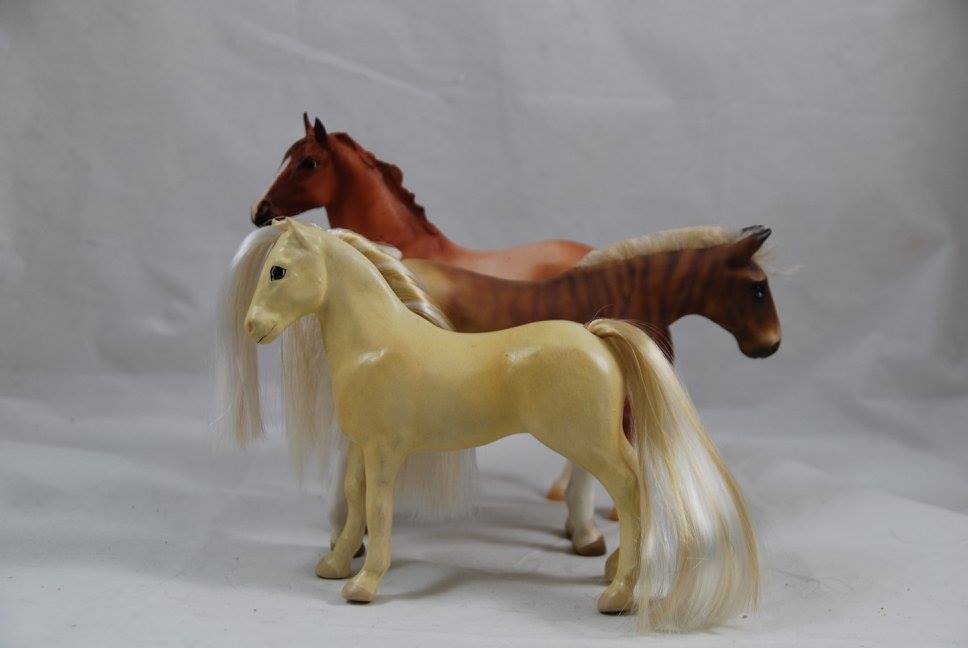 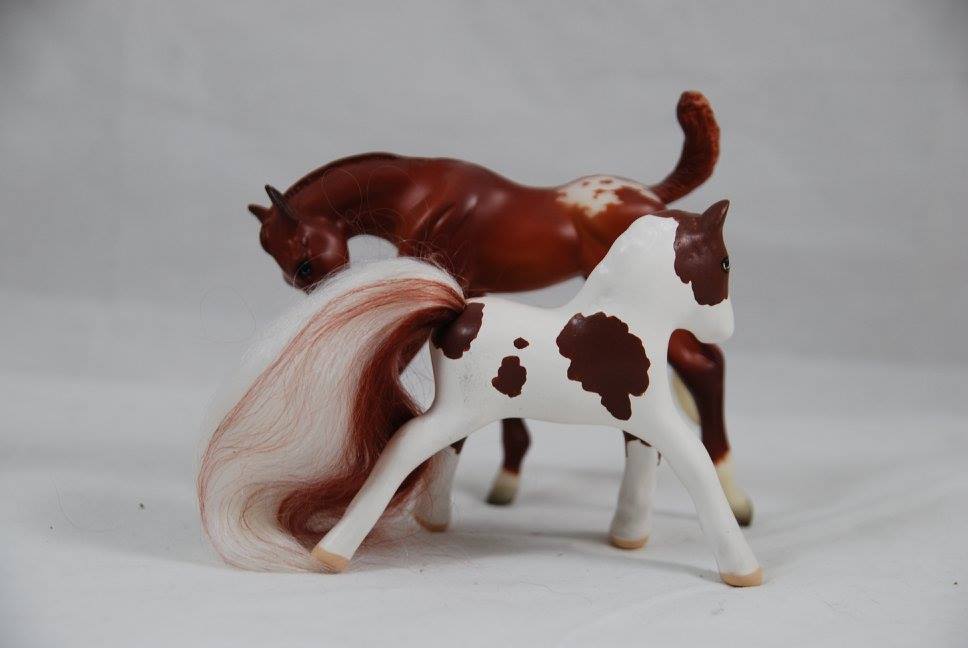 Although conventionally referred to as 1:24 scale in reality these models are much closer to 1:18 scale.

Below is a comparison between a Schleich heavy horse, light horse and pony: 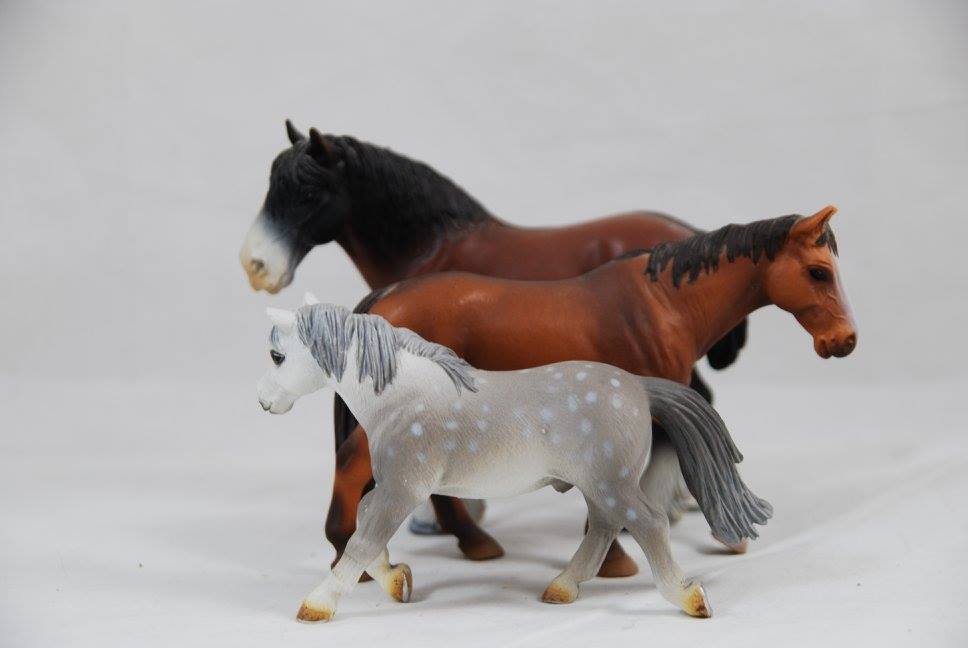 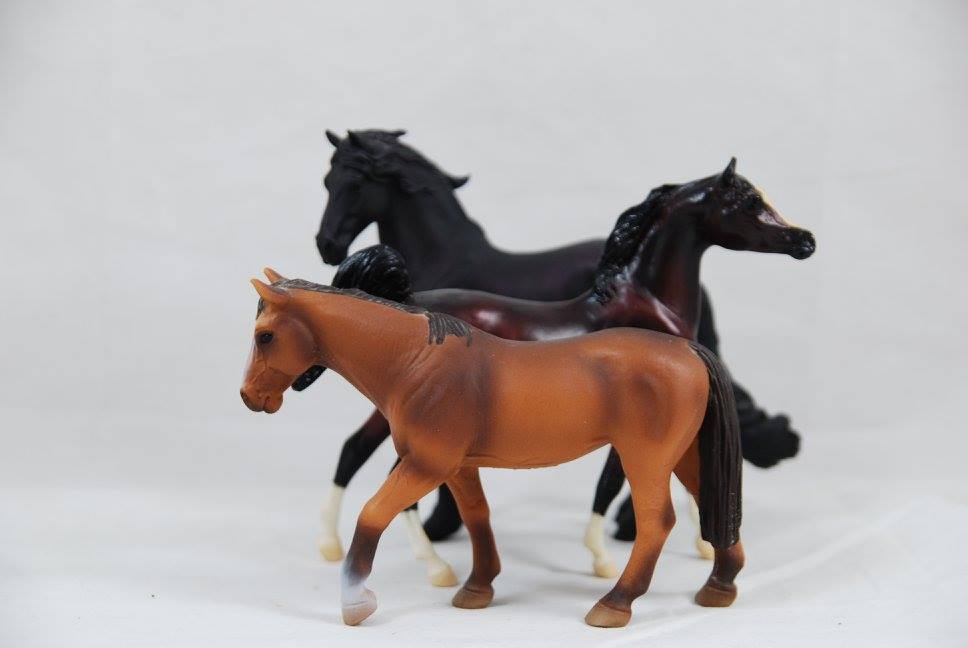 Stablemate horses are approximately 1:32 scale, it is not uncommon to see items sold as 'large Stablemate', particularly resins. These models are slightly larger than Breyer Stablemates. Stablemate scale Peter Stone models are known as Chips. Like other sizes the size of the model will vary depending on the horse type, interestingly as you can see below, this heavy horse is smaller than its light horse counterpart: 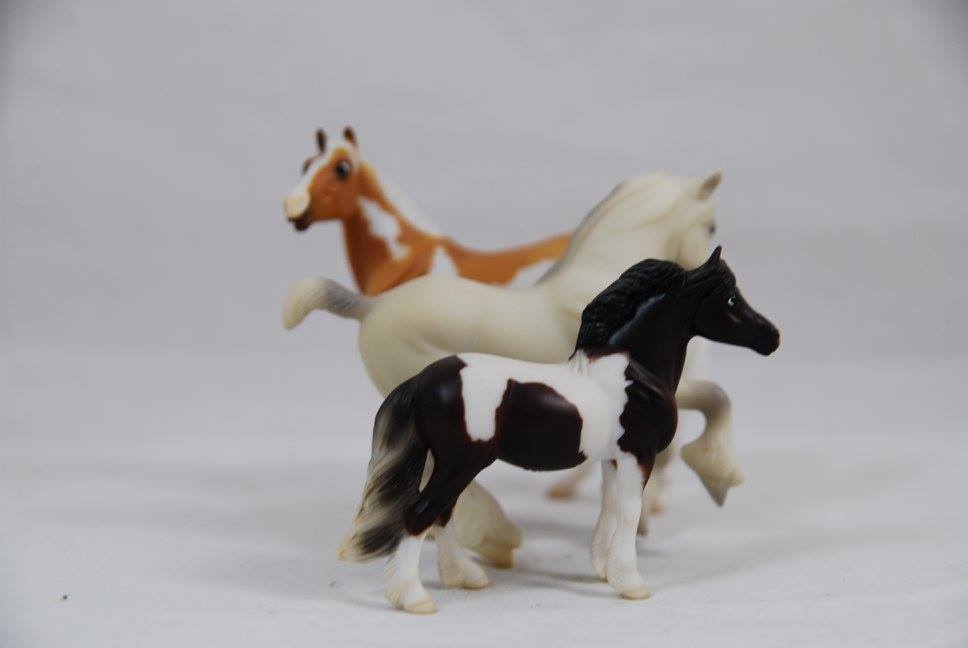 Light Horse (G3 Paint Horse)
Heavy Horse (G2 Clydesdale)
Pony (G3 Athletic Pony)
​
Peter Stone chips are Stablemate scale but are slightly larger than Breyer Stablemates. Below is a comparison between a Chips and a Stablemate: 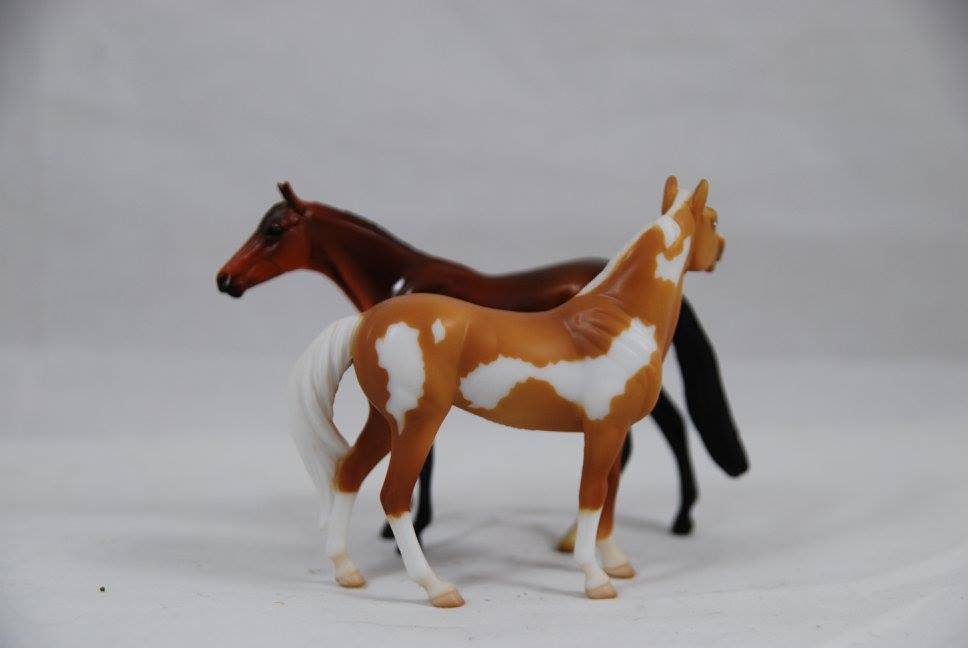 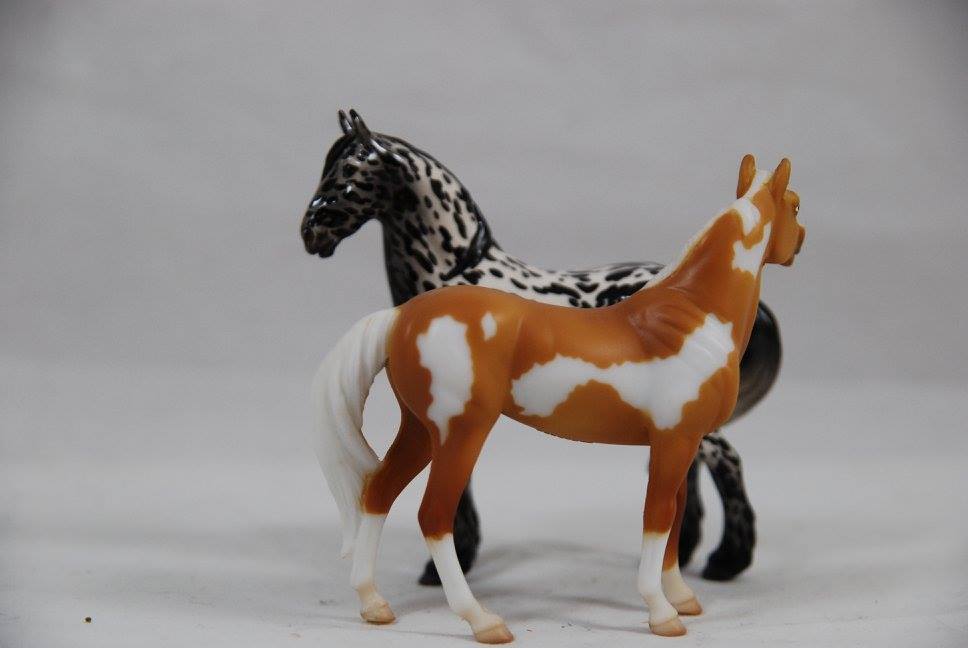 You are often going to find items that are in different scales. Just remember, where the scale is given, the larger the second number the smaller the scale. 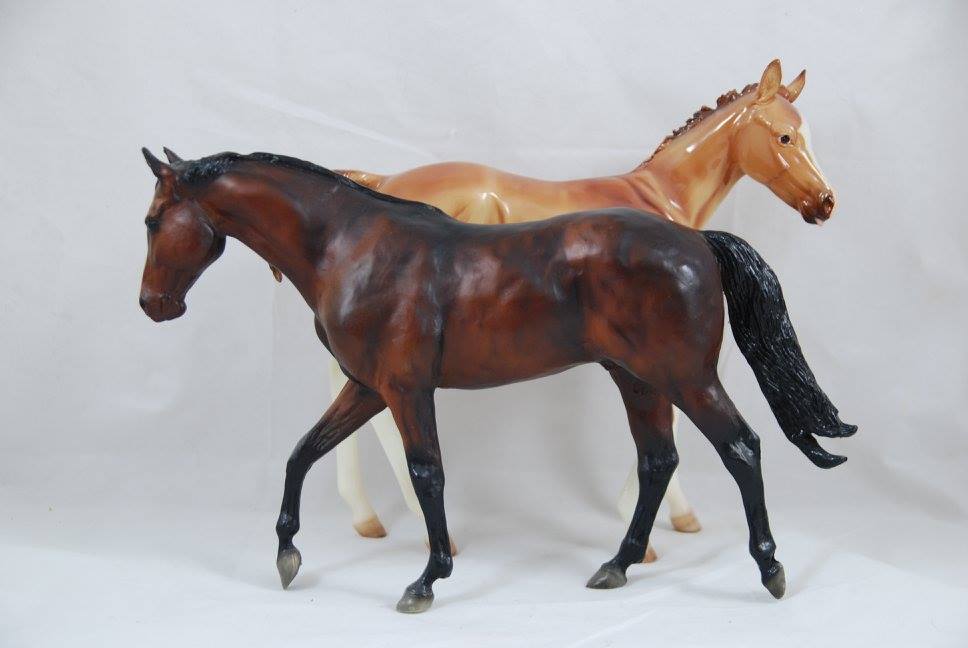 1:6 scale (Camilla foal)
1:9 scale (John Henry)
​
This is a comparison with a Traditional scale foal: 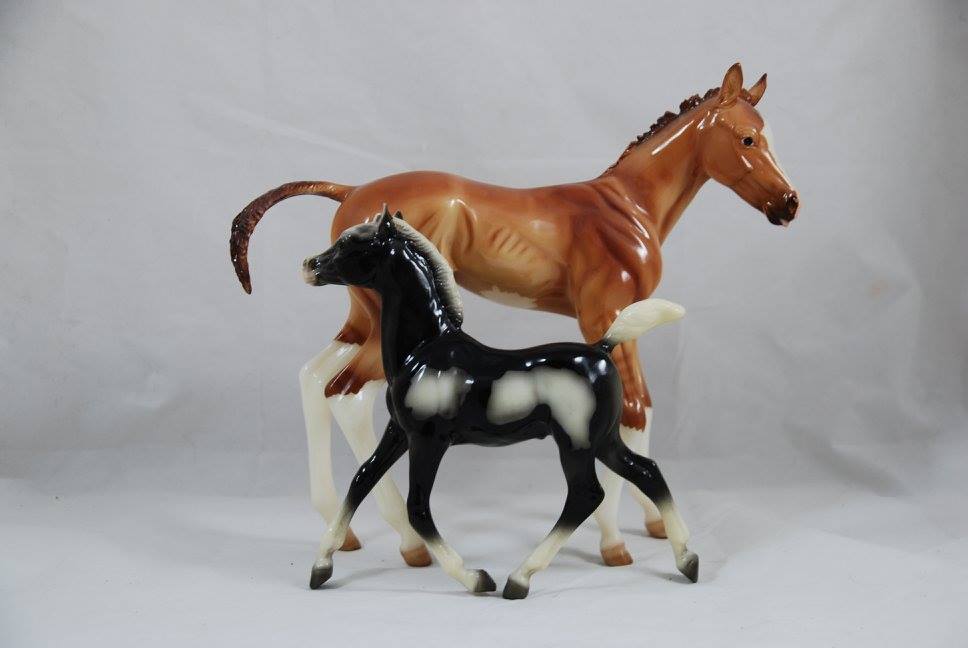