CTF is a uniquely British concept but is slowly being seen more and more in usage by hobbyists around the world. It stands for Craft, Toy, Foundation and includes brands from Schleich to Julip.

CTF Bendy in the true sense refers to flexible models made from latex or rubber such as Julips. However, in terms of showing it is often a section for all models that aren't made from plastic. It usually will also include hand made models and plush (although I suppose technically these are bendy)!

At many shows CTF is grouped together and bendy will be included in the normal CTF section. In the absence of a CTF section these models could also be shown in original finish. 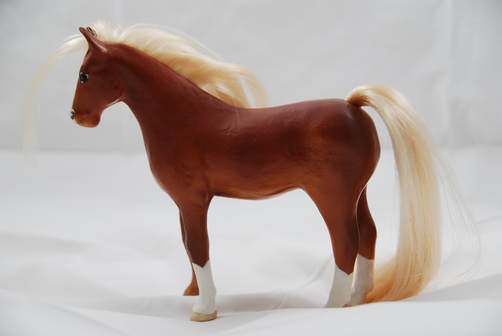 A Julip Family Horse in Chestnut

The most common brands that you will see in a CTF Bendy section are:

You may also see a variety of handmade horses such as felties or Crystal Moon Ponies. Models are often ooak rather than mass produced pieces as this is simply the nature of the models. It may, however, include some mass produced items such as Julip Horse of the Year models.

CTF is a unique concept and as a result there are a few fuzzy areas. Most of these are governed by convention or left to the show holder and you simply have to learn these unwritten rules or check with the show host exactly what they want.

I have duplicated this section in both the bendy and plastic sections as there is huge overlap.

The vast majority of custom CTF models go in custom. However, there are a few exceptions:

When customised these models stay in their original section. Why is this? Well in the case of things such as Dream Ponies (Magpie) they were often sold as kits so the vast majority may be customs. Secondly there is an issue of realism of finish. It simply seems more suitable to have a Julip HOTY custom up against other Julip HOTY models than custom Breyers.

However, not all show hosts follow this convention so always check first! Some may have simply never thought about it...

There are a few things that usually go in CTF Bendy rather than plastic. These are:

This is because they are more similar in type to bendies (and in the case of Julip HOTY are the same brand) so it seems more sensible to put them in CTF Bendy rather than plastic. However, again check, not all shows follow this rule.

Some brands are simply not clear where they should be. As a general rule everything that isn't plastic should go in bendy, but this doesn't always follow. The following brands may end up in either section depending on the show host:

If in doubt...check! Or just leave showing your model until a show with a combined CTF section...

A very small selection of shows have a section called 'craft collectable', this has been referred to as 'posh CTF' by some hobbyists, although a little derogatory it does actually explain the section quite well!

Craft collectable is basically for expensive bendy CTF models that are more realistic. It would include non-Foundation Equorums, RubberNedz and Rydals. The idea being that these sculptures are of a standard much higher than say a Foundation Equorum or Julip Original and should therefore be judged separately. 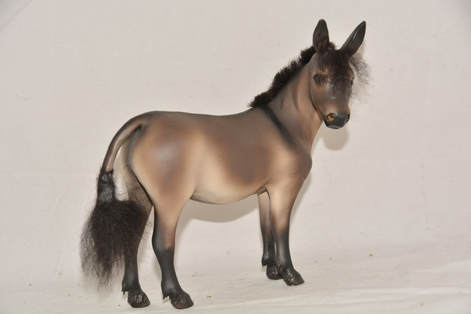 An Equorum Donkey in bay