Who could ever imagine such a sweet and innocent face would be capable of such mischief!

At that moment an ear piercing scream ran out through the house and into the garden. “What on Earth?” Josie’s mother turned almost white as she ran towards the house, followed quickly by the entire entourage.
There in the kitchen stood the two caterers. And in the corner, by the open back door, covered in white fondant icing was Julie, the little grey donkey.
It took a moment for the reality of the situation to settle in but when it did Josie’s mother let out a cry that was most likely audible from space. Her father attempted not to laugh and Josie just stood there, completely speechless as she watched her donkey munch away on what had been her wedding cake, box and all.
“What are we going to do?!?!?” Josie’s mother screamed “Well don’t just stand there David, get this awful creature out of the house, I don’t even understand how she managed to get out of her field, o what are we going to do what are we going to do?” She hung her head in her hands and groaned silently to herself.
Knowing better than to delay Josie’s father ushered the donkey back through the front door and with a dog lead around her neck led her back into the field to join her herd.
Josie continued to stare. She wasn’t quite sure whether she wanted to cry or laugh, the whole seen was like something out of a school food fight. White buttercream covered the kitchen and bits of fondant flowers mixed with sponge and cardboard lay about on the floor.
“Right” said Josie’s mother pulling herself together “we will find a cake, don’t you worry love, we’ll get it all sorted, make sure to not mess your make up, it’s nearly time to go to the church, you must be so excited” she pushed a hair off Josie’s face and headed off armed with a laptop and the house phone.
“Don’t worry, we’ll get this cleaned up” the caterers smiled as they started to try and clean up the scene of destruction before them. If needs be we can probably source a cake locally, it won’t be the same but at least it will be something. Josie continued to stare, not really sure what to think.

Before long it was time to head to the church and Josie forgot all about the destruction in her kitchen, or the ruined cake as she said her vows. Outside the church she beamed with happiness as the photographer snapped images of her and the family.
As they walked up to the wedding cars she felt her mother grab her arm “don’t’ worry love, it’s all sorted, your uncle Steve is going down to Waitrose now to get a new cake”. It took Josie a moment to remember what had happened, she felt a sinking feeling in her stomach as she realised she’d have to explain to Patrick how the several hundred pounds worth of wedding cake they had carefully chosen and designed had been destroyed in mere minutes by her pet donkey. Not the best start to a marriage.
As they drove back to the house the anxiety grew as she tried to figure out how she was going to break the news. Surely he would see the funny side? Her father after all had found it hilarious, maybe Patrick would too? Maybe she should just make out like it was a joke, “hey Patrick you’ll never guess what happened this morning, it was hilarious, Julie ate the wedding cake!”. In her head she pictured his face, moving from anger to disappointment to pain. She couldn’t picture him finding this very funny at all. She sunk into the chair.
“What’s up love?” Patrick said as he turned to her, “are you OK?” his face turned to concern as he held her hand, “not having regrets already are we?” he laughed.
“Something awful happened before we left” she said as she suddenly burst into tears “Julie, Julie ate the wedding cake” she wailed in the back of the car, causing the driver to check his rear view mirror to make sure all was OK.
“Whose Julie?, is she one of your cousins?” Patrick said confused.
“No, Julie, the donkey!” Josie wailed back.
Patrick took a moment to allow the news to sink it and then out of nowhere he burst out laughing.
“It’s not funny” Josie cried “she’s ruined everything”
Patrick smiled and put his arm around her, “I know the cake was important to you and I know you wanted everything to be perfect, but this day is about us, being married and as long as we have that then I don’t care if we have a half eaten cake or a full one”

As they pulled up to the house Josie wasn’t really feeling much better about the situation. At the same time she saw her uncle Steve’s car pull into the drive and watched him leap out, triumphant with several large Waitrose shopping bags.
“There she is, the beautiful bride” Josie’s mum beamed, “let’s get you a drink, Champagne? Of course Champagne it is your wedding day” she beamed at Josie as she thrust a glass into her hand before bustling off to usher guests and welcome people whom Josie was pretty sure she had never met.
At that point Steve stepped out of the house with a broad grin across his face. “Ladies and gentleman” he announced with a proud and victorious voice “I present to you, the wedding cake”. Josie felt her heart do a 360 degree turn inside her chest, she thought she would faint, what would people think, what had he bought, she felt like she wanted the whole ground to eat her up.
And then she watched, as the caterer wheeled out on a trolley a long brown cake. It took her a moment to realise what it was and when she did she burst out laughing. She could barely stand she laughed so much. Presented in front of her were four caterpillar cakes, with their ends removed to make one long cake, surrounded by butterfly cakes and sugar flowers. The whole thing looked slightly magical and slightly comical at the same time.
Within moments waves of laughter rippled around the stunned crowd as everyone realised what had happened. Josie and Patrick walked up and proudly cut their caterpillar cake before happily eating a slice. It may have been an unusual choice but it was the best choice. After all what could have summed up her personality more than a child’s birthday cake?

Despite her uncle’s last minute saving of the situation Josie was still not particularly happy with Julie when she went out to the paddock in the afternoon sun to say goodbye before they headed off on honeymoon. And as she pulled the gate shut behind her she turned to say one last goodbye and watched, as slowly but surely, it rolled out of its lock and opened. She burst out laughing, properly securing it and winking at the innocent looking donkey who had nearly ruined her wedding. 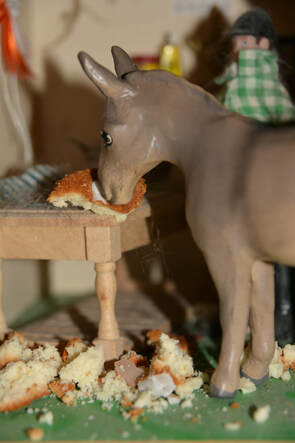 Julie developed a bit of a taste for cake it appears!