What will happen when Chloe decides to try and make Crackers an Instagram star? 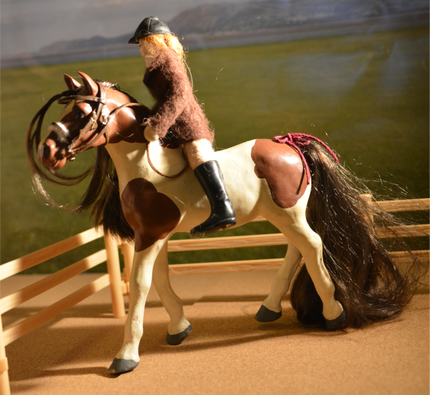 No saddle means gallop right?
“HAVE you seen this?” Chloe shoved her phone under Edward’s nose. It was of course, as it usually was, on Instagram.
“This horse has like 20,000 followers and Equestrian companies send his owner free stuff and he models it for them!”
Edward groaned as he looked at the picture of yet another horse for like the 100th time that evening. Chloe had become obsessed with the idea of making Crackers and Instagram star, convinced this was the way to fame, fortune and some free horse treats.
“Yes but that horse is adorable” Edward replied looking at the images featuring a very cute little pony getting up to all kinds of adorable antics.
“Crackers is more….well...he doesn’t exactly have the cute factor does he?”
Chloe almost fell off her chair as she recoiled back in horror. “What do you mean he doesn’t have the cute factor? He is ADORABLE, he would get way more followers than this little thing” she huffed.
“Seriously Chloe, nobody would want to look at pictures of Crackers on the internet. Nobody.”
“Well I think your wrong” she stubbornly crossed her arms after snatching back her phone. “Tomorrow morning I am going to give Crackers his very own Instagram account and he shall be a star”
Edward rolled his eyes as he leaned back into his chair and continued to read his book. Chloe was now making strange snorting noises as she scrolled through her phone and made notes as to how she could make Crackers famous.

The next morning Chloe was up early and ready to head to the charge. Her phone was charged up, she had her notes and she was ready to make Crackers and internet sensation. He would quite literally go viral (in the internet sense, not in the sense of that time he caught a weird viral infection having escaped for three days and had to be placed in insolation).
She packed up her best grooming kit and headed off to the yard in her mum’s car. “What are you planning on doing today love? It’s a nice day why don’t you go for a hack? Or maybe you could work on your dressage test for next week?” Her mum wittered on completely unaware of the greatness her daughter was about to achieve. This was going to be bigger than Shamrock. Bigger than Hovis. Bigger than those donkeys that carry wine at people’s weddings. Crackers was going to be a star.
As she arrived on the yard and approached Crackers stable she became immediately aware that it was going to take a few hours to get him to the point of Instagram sensation readiness. The first thing she really needed was an adorable picture to use as his profile pic. She wanted to get him all tacked up and ready looking over his stable door, just like she had seen one of the accounts she followed do. But first she was going to have to turn her currently green and brown horse back into a white and brown one. Why on why had she got a coloured?
After about an hour of scrubbing Chloe was starting to contemplate the idea that maybe Crackers wasn’t the best horse to be using for this task. She looked over to the field and noticed Clove, happily grazing under some trees, rug still on and no sign that she had been rolling in the mud. But the more she thought about it the more she concluded that actually, the fact that Crackers ruined everything, was never clean and seemed capable of non-stop mischief was probably what was going to make him famous. That said she still needed him to look gorgeous for that profile picture.
Three hours later and Chloe was soaking wet and filthy but Crackers shone. His coat was gleaming and his mane was neatly plaited back in a running plait, just like those fancy Spanish horses. She popped his bridle on and put him back into his stable. Now she just needed one quick snap and she would be away.

Half an hour later Chloe was still attempting to get Crackers to actually look at the camera. Minstrel, however, looked happily over her stable door and even posed when she saw the camera phone point at her. Just a pity she had apparently rolled in her stable. Maybe she would be a better choice Chloe thought? No no, Minstrel wasn’t hers and afterall she was the one who wanted the free stuff!
“What are you doing?” Lisa looked over Chloe’s shoulder at the camera phone “Are you actually going to ride that horse today or just photograph him?”
“I’m taking a profile picture for his new Instagram account” Chloe beamed back up at Lisa.
“Who on earth would want to look at pictures of Crackers? It’s bad enough most days having to see him in real life!” Lisa laughed as she patted him on the nose.

Chloe glared at Lisa, “O wait you’re actually serious? Umm OK well maybe if I stand behind you and hold a carrot?” She desperately attempted to back track so as not to offend one of her favourite clients.
“Good idea!” Chloe beamed at the suggestion. A few moments later and Crackers had posed for the perfect picture.
“Right, now we need to get some snaps of him being ridden and doing fun things to start off the account”. Chloe smiled.
“OK well be safe and please don’t use your phone whilst riding, it is quite dangerous” Lisa groaned, wondering why she even bothered attempting to persuade her clients that maybe having two hands on the reins and not doing a live stream of your cross country course from your phone would be a good idea.

Chloe removed a now rather confused and slightly grumpy Crackers from the stable and headed out for a hack. She managed to take several snaps of his ears and quite a few of the floor but she got at least one she was happy with. His ears were forward and you could see the countryside beyond. Perfect she thought, everyone likes artsy Instagram pictures and with the sun just setting the lighting in this one is gorgeous.
Now what she pondered to herself flicking through her notebook. Aaaa yes of course! Hashtags! All Instagram accounts need to use hashtags to increase their popularity. Now what was that one for this month again? O of course, #nostirrupsnovember.
Chloe didn’t like riding Crackers without stirrups, he had a tendency to do unpredictable things and she quite liked the safety blanket of having something to put her feet into in case of rearing, bucking or random airs above the ground, just some of the additional elements he liked to put in during schooling. But maybe if she just got Edward to quickly grab one snap of her bareback, she would only need to be on for like two seconds? I mean that couldn’t go wrong could it?

She found Edward cleaning his tack and eating a rather large chocolate bar. “Can you do me a favour and quickly photograph me riding Crackers?” she smiled sweetly at her brother.
“It’s getting dark” he said as he shoved another chunk of Dairy Milk into his mouth. “I’m not sure the lighting will be very good”.
“It’s perfect” Chloe smiled “it’s artsy, I’ll add a filter as well for the perfect effect”. Edward rolled his eyes and grabbed one more chunk of chocolate before heading outside with his sister.
“Umm where’s your saddle?” he said as he stared at Crackers who was stood tied up by the outdoor school in nothing but his bridle.
“It’s for No Stirrups November” Chloe retorted in a tone that made her brother sound like a complete idiot for not knowing this obvious fact.
“You’re going to die” Edward said matter of factly as he opened the gate to let her in. She led Crackers up to the mounting block and half vaulted half hurled herself onto his back.

Crackers was clearly unsure of this new development. On the plus side he wasn’t having his girth tightened, on the down side Chloe was quite boney.
“Well at least he’s got plenty of padding” Edward laughed. “Now quickly do whatever you want so I can get back inside in the warm”.
Chloe urged Crackers on to a trot and Edward snapped a couple of artsy shots of the pair looking pretty.
“Right I’ve got it, you can get off now” he shouted from the other side of the arena. Chloe asked Crackers to slow down but he was having waaaay too much fun. He wasn’t quite sure if he liked the bouncy human on his back but without his saddle he was surely allowed to go and gallop? Afterall no saddle means field means GALLOP.
“Crackers NO!!!!!” Chloe shouted as he bolted off around the arena at high speed.  “I think you should probably slow down” Edward mused, half laughing, half presenting a ‘I told you so’ face.
“I CAN’TTTTT” Chloe screamed as they did another lap. And then suddenly, without any warning Crackers slammed to a halt and sent Chloe over his neck, over the arena fence and into a massive muddy puddle.
​
“Now THAT is going viral” Edward laughed as he clicked end on the recording.